Join Catholic Charities Odessa as we welcome guest speaker Roberto Barrera for an Inspiring Night of Hope. Help us raise awareness, hope, and funds to continue our mission to serve those most in need.

About the Guest Speaker

Bobby attended junior college for two years before enlisting in the Marine Corps in February 1969. On September 16th, while serving with the Marines in Vietnam, he was seriously burned when enemy forces exploded a 500-pound bomb rigged as a land mine beneath the armored personnel carrier he was traveling in. 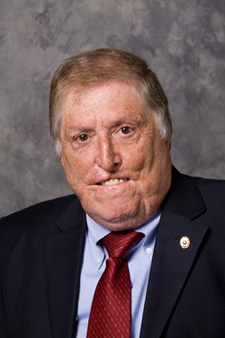 The explosion and fireball that ripped through the vehicle burned Bobby over 40 percent of his body, causing serious facial burns, the loss of his right hand at the wrist and his left arm at the shoulder. He was medically retired at the rank of corporal from the Marine Corps in September 1970. Bobby battled courageously to overcome numerous physical and mental obstacles. He earned his bachelor’s degree in psychology at St. Mary’s University, and later, while teaching at Del Rio High School, earned a Master of Education degree in guidance and counseling at Sul Ross State University.

In addition to teaching high school, Bobby’s career has included positions of leadership and multi-level management while serving as a juvenile probation counselor and as Family Support Center Director at Laughlin Air Force Base in Del Rio from 1989 until his retirement in May 2004. He currently conducts motivational presentations for the Department of Veterans Affairs.

Bobby is the recipient of numerous honors and awards. They include the DAV Outstanding Disabled Veteran of the Year for 1998; LIFE’s (Leaders In Furthering Education Foundation) Presidential Unsung Hero Award for 1998; Disabled Veteran of the Year for the State of Texas in 1990 and again in 1998; and Department of Defense Outstanding Employee with a Disability Award for 1997. The late Jesse Brown, Secretary of the Department of Veterans Affairs, selected Bobby’s personal story of overcoming disability for inclusion in his book, “The Price of Their Blood.” In 2005, Oliver North included Bobby’s story in one of his television series, “War Stories with Oliver North.”

A life member of DAV Chapter 5 in San Antonio, Bobby and his wife, Maricelia, reside in Del Rio. They are parents of three grown children and grandparents to four grandchildren.